It’s been quite a while since the last Modular Spaces installment, but we’re back with a very special one. I’m calling this “work/music” balance, and it’s a topic that touches me personally quite a bit.

As somebody who works in design for the music (instruments) industry, but also dabbles in the creation of the music itself, I often find myself facing a dilemma: should I do some paid work, or just relax for a moment in front of the modular? Taking breaks boosts productivity, we all know that, but it’s easy to get carried away and turn that 10min break into a full hour of wiggling.

The dilemma can be even more pronounced if work and play take place in the same space, and that’s exactly where this article comes in. Let’s look at two people who use their space both for work and music! 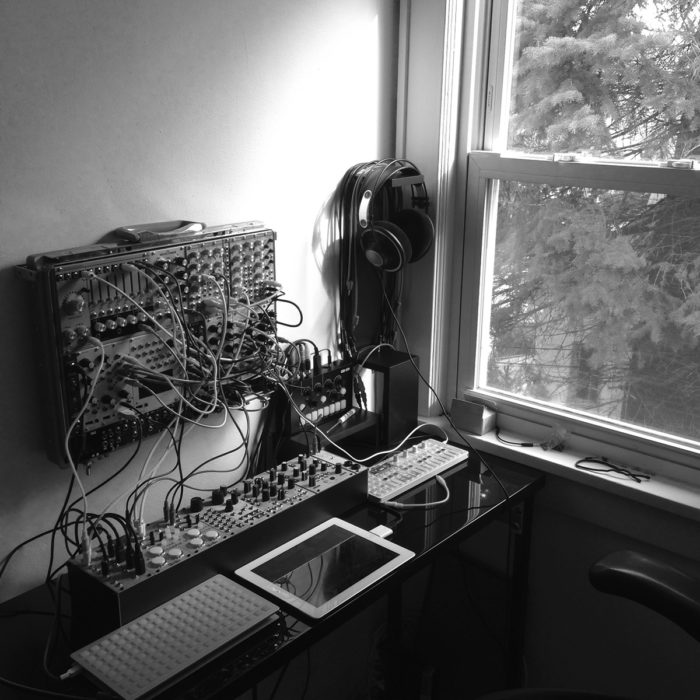 The first thing you notice about Brian’s music space is the window, the view.

Undeniably this feels like a place that makes you want to create some music. “It’s great to be able to open the window and capture some bird sounds or something to make a nice backdrop behind a bunch of weird electronic synthy sounds.” Brian tells me.

His studio is a corner in his office. It is very small, made up of a slim black desk (another Ikea find) and little more. The case was mounted to the wall, to keep the desk clean and organized. At the same time, the latter is shallow enough to make it comfortable to reach for the moduar.

Brian wanted to make a case of his own, so he got a brief case from Etsy and tried his hand at some DIY. I managed to set it on fire a couple of times while cutting through the metal on the inside… but had a slimline 2x 84hp case of my own in the end” he tells me during the interview. Life is not easy for those who DIY.

Despite the difficulties, there’s a beauty in making your own instrument, Brian continues: “I guess it’s one of the least important parts of music making, but I’ve found that the more of a personal attachment I have to these things I spend so much time with, the more fun I have with the whole process. Personal customization is what I enjoy most about modular systems; the case and workspace is a fun extension of that.” 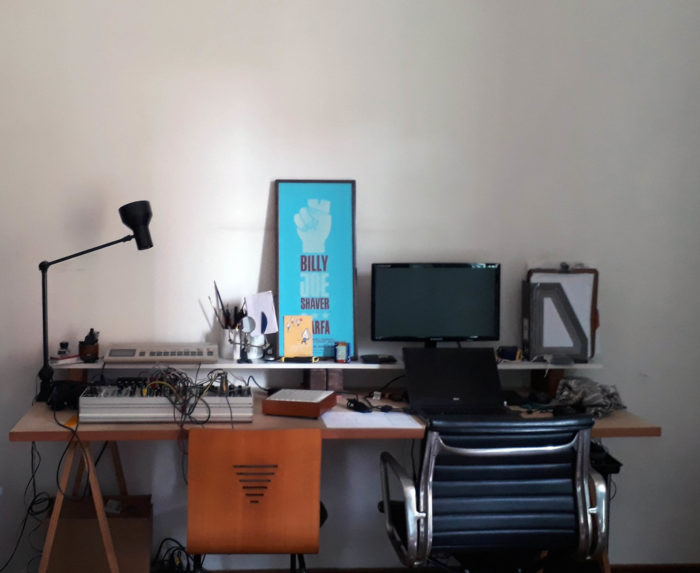 Vito’s desk is half music and half architecture, except, it’s not really like that: “Since architecture is a very time consuming effort the half/half thing is mostly spacial. The time ratio is architecture all the time with some synth breaks. I’m an architect living in São Paulo, Brazil. I do mostly collaborative works with other offices.”

Still, it seems like a good idea to take some “synth breaks” to keep the motivation high and work better.

This is not the only sound-related activity Vito pursues. With a friend (who is also an architect) he has an electro-acoustic duo called yf. For the São Paulo Architecture Biennial they worked on a sound map, created using 64 speakers that reproduce recordings from the city.

There is a historically interesting link between architecture and music/sound. Music concrète, Xenakis, Varése’s and Le Corbusier’s work on the Philips Pavilion, the IRCAM building by Renzo Piano, Nuno Canavarro (who studied architecture at Oporto School) are among Vito’s many sources of inspiration.

It does not come to big surprise that Vito is very influenced by Bernhard Leitner, famous for his work on the relationship between sound, space, and body.

I ask him how, or if, his work as an architect reflects on the ways he approaches the modular. “I’m always thinking on how to organize functions into form and that involves more ‘removing than adding’.” he replies, “On top of that the so-called ‘paulista architecture’ is very stern and austere, with its modernist obsession with ‘truth’ regarding materials and building methods (this is the school I went to, for example). I don’t really buy into the moral overtones of raw materials and whatnot, but these are things that have influenced me a lot, whether I like it or not.”

When it comes to the modular synth, he seems to be mostly fascinated by the idea of music-as-machine. “[…] I think it relates to some aspects of architecture. To stablish relations between independent sets of functions and processes as to create a whole…”, he elaborates further “Music is closely related to its space of composition or performance, but since electronic music can be created and performed without any specific setting, its relationship to space is particularly open. A very interesting quality, imo.”