I guess you all know the story by now. Back when there was mainly Moog and Buchla, the two took very distinct directions regarding the control of the modular. While Moog and Deutsch decided in favour of the more practical, and economically fruitful, piano (or organ) keyboard, Buchla and Subotnick went for a touch-based “non-keyboard interface”, as Subotnick himself puts it in a recent RBMA video.

As we have seen in our recent article about cases, the east coast / west coast dichotomy is still very much alive in the frankensynth world of eurorack. So you’ll find people who will react with an expression of disgust to the very word “keyboard” and others that will happily embrace the black and white keys as their interface of choice.

Of course you don’t necessarily need a controller to play a modular and there’s a lot more to it than keyboards. In the end it’s really a matter of musical vision. The keyboard might make things easier and more “playable”, but it might also prevent you from really using the instrument for what makes it special. Let’s just for one second picture Emerson sitting in front of his huge Moog modular system, hammering on the keys like there’s no tomorrow. Would his music have sounded much different on a non-modular Minimoog?

There’s a lot of ground between the traditional, piano-style interface and the more experimental ones. Let’s see some possible approaches in detail. 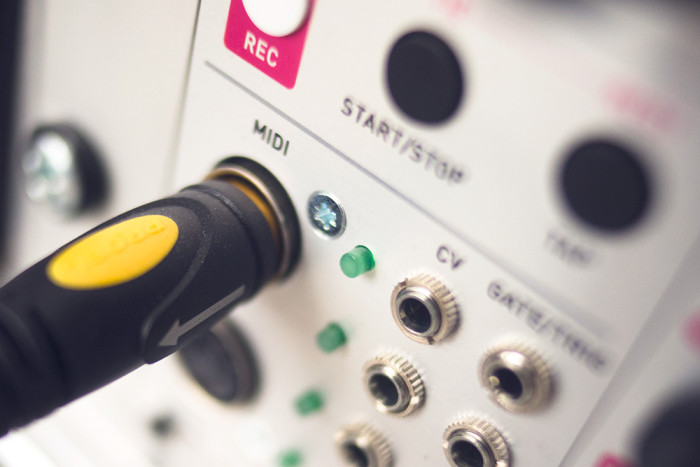 For the Traditionally Minded

When it gets to MIDI-CV interfaces we’re really spoilt with choices, some of them are even pretty affordable. Take any keyboard controller that has a DIN MIDI output, attach that to the module of your choice and you’re ready for some V/oct action! If all you want is to play the modular with a keyboard, then I’d recommend to go with a simple one. The only thing that you might want to consider is calibration. Some modules will require you to calibrate the outputs manually from time to time, using some trimmers on the back and a voltage meter to measure the output, I’ve personally found this a bit cumbersome on the long run (though many good interfaces might not need re-calibration so often). Also if want to play your modular with a tuning that is not the standard tempered one, make sure the MIDI-CV converter will let you do that.

If your keyboard only has USB (the majority will only have that) the choices are a bit more limited, Expert Sleepers will offer a module that can act as a USB host, it’s been announced at NAMM 2015 and should be available soon (price TBA).

A small selection of keyboards even have built-in CV outputs, two models that come to mind: the KMI QuNexus and the AKAI MAX25/49. I have no experience with the AKAI, but I own a QuNexus. I’ll maybe write a separate post about my experiences with that controller (which are a bit of a mixed bag to be honest).

It should be noted here that due to the very nature of the modular synth, you’re not bound to use a keyboard to play tempered scales, nor do you have to use it to play notes. What you do with the CV/Gate outputs is totally up to you.

If you like the idea of a system that’s one Easel-style, self-contained suitcase, where you just open the lid, attach an audio cable and start playing, then you might be after a keyboard controller module. As of now, the offering is not really vast. There’s a very Buchla-esque, presssure-sensitive one from Verbos called the Touchplate and a smaller, simpler, but very stylish one, from Critter&Guitary called Melody Mill. Both have a classic piano-style layout.

The Melody Mill is very similar to their Pocket Piano and Bolsa Bass keyboards and, besides the standard CV/gate/trigger outputs, also offers MIDI in/out, a sequencer/arpeggiator functionality and a built-in square wave oscillator. While the round wooden keys are pretty good looking, they unfortunately lack velocity/pressure, so you’re left with just the on/off action. 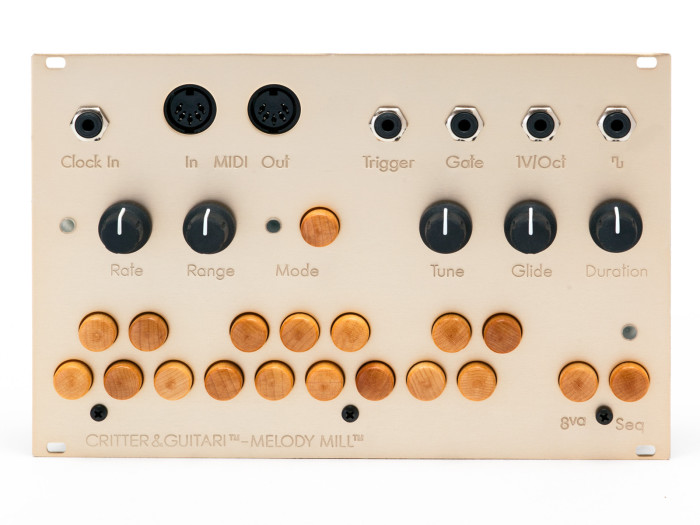 I’ve had the chance to try the Verbos Touchplate some time ago. While the module looks gorgeous and feels well built, the pressure CV only has a very narrow range so it’s quite hard to control the effect of the pressure, it behaves a bit like the aftertouch on many synth keyboards.

Update: Reader Simon F reports that the above problem is only present with first-gen units and was fixed in the later revision. You can probably also get your first-gen unit fixed, I suggest you contact Verbos if you feel that the pressure response is not really as it should be.

Of course you could of course also skip the above modules and go with the “real thing”: the Buchla LEM218 is compatible with Eurorack CVs and even has MIDI, but it’s probably not the right time to buy anything from Buchla right now.

Update: it seems that Roman Fillipov of Sputnik is working on a keyboard module as well. Here’s the rough specs:

If classic synth keys are more down your alley, but you still want something that sits in your portable case, check out the WMD & SSF Monolith, which is basically a full modular synth (it comes with all the modules you see in the photo below) with a classic 3-ocatave keyboard or the the very similar Super37 by Super Synthesis. 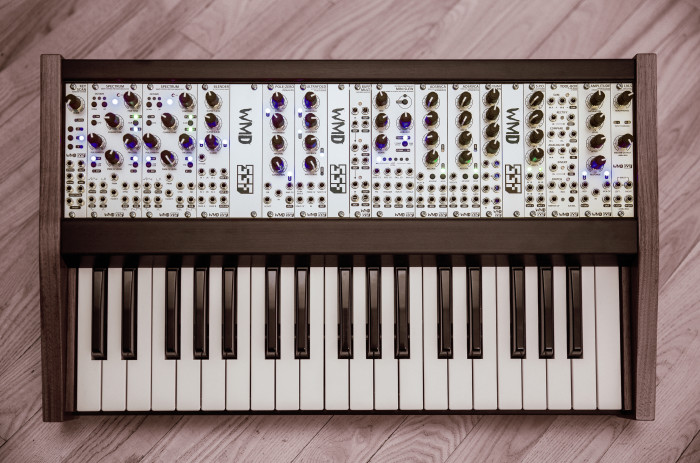 Horizontalpitch: I’ve seen the Monolith: what was the initial idea behind this system?

William: The Monolith was designed to bring modular to users that haven’t used modular before by making a simple system with good documentation that users can get into quickly to start learning. Beyond that, the modules were designed with advanced but easily grasped features to aid the user’s growth in becoming an advanced patcher.

Tyler: The idea is to make modular approachable to a broad market. It provides a solid foundation for beginners, and as you gain knowledge from playing with it, the possibilities become practicality limitless. I’m still discovering new tricks with it.

HP: you probably know the Super37 keyboard case, in which regards is the Monolith different?

Tyler: Our case was a collaboration with Super Synthesis. The major differences are:

Horizontalpitch: What type of musician should play the Monolith?

William: The Monolith is designed to bring people who haven’t considered modular into our world. Of course we want everyone to play one, but the type of musician would be one who is bored with working “in the box” or wants a more flexible mono synth that constantly inspires creativity. We want to bring those special modular “happy accidents” that occur to guys more used to playing a keyboard.

Tyler: I’d like to see everybody play with a Monolith!

Horizontalpitch: What would a typical use case scenario look like?

William: Typical use would be like many other mono synths; except it forces you to craft every sound, inspiring creativity each time you build a new patch. You can use it to make standard (and f-ing fat) subtractive sounds, but you can do much more than that by getting a little creative and experimenting. The Monolith is designed to bridge the gap between a fixed-architecture mono synth and a closed euro system, bridging the creative possibilities with a recognizable interface.

Tyler: There shouldn’t be any “Typical” use. Yes this can cover your standard Mono-Synth needs, but it can do so much more than that. This is not a Fixed-Architecture synth so don’t let the keyboard fool you.

Last but not least, there’s also DIY version by d:machinery, which you can build dismembering an Alesis Q25, but as far as I know, no kits have been released yet, but they might laser you the pieces if you ask nicely. 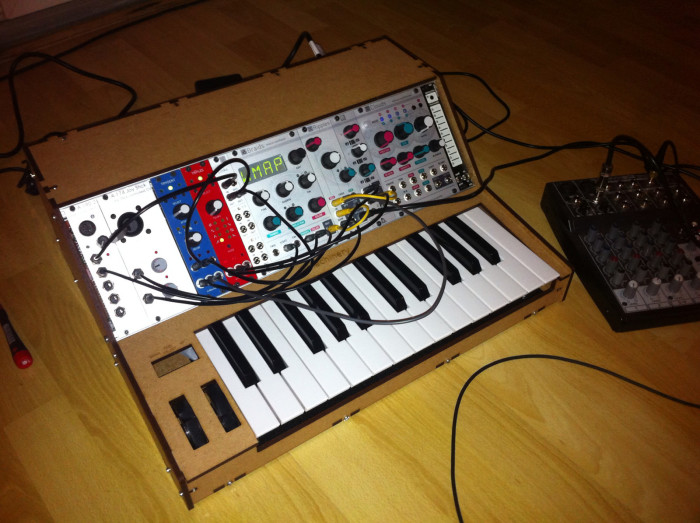 If you go one step further you’ll find a bunch of modules, which can be mis-used as keyboards, but are a lot closer to Buchla’s “non-keyboard interfaces”. A classic is the Make Noise Pressure Points, which offers 4 pressure sensitive pads combined with a voltage memory function, several of these can be combined into a big and pricey, touch-based controller. The Meng Qi Voltage Memory drops the pressure sensitive pads (at least partially) in favour of more features and combines the keyboard-style functionality with various sequencing modes. Both the Pressure Points and the Voltage Memory lend themselves to many applications from direct control over parameters, to sequencing and “preset storing”, but there’s some major differences that should be noted. While the Pressure Points module is analog, the Voltage Memory is digital. So on one hand you get smooth, infinite-resolution pressure control from the first one, on the other you get 84×6 slots to store your voltages. Both modules will let you sequence the pads, but the Voltage Memory adds alternate sequencing modes, an arpeggiator, a looper and a drum sequencer. If you’re more the direct control type of person, you should probably check out the Pressure Points, if complex sequencing is more down your alley, the Voltage Memory could be an interesting addition to your system.

The latest news is that Meng Qi just sold a Squishable System (see photo below) to none the less than Nine Inch Nails. Quite an accomplishment! 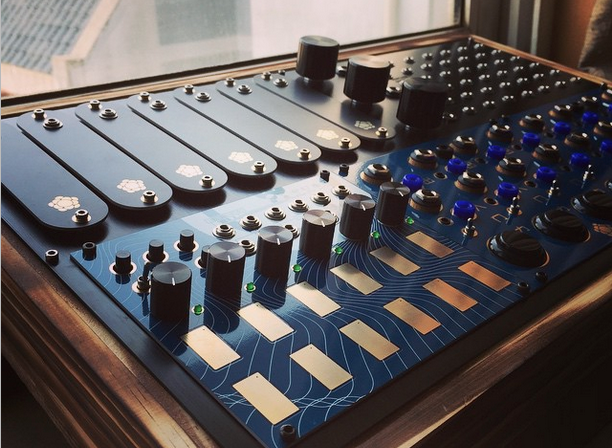 The Meng Qi Squishable system (the Voltage Memory is the module in the bottom left corner). Photo curtesy of Meng Qi

We got in touch with Meng Qi about their Voltage Memory module.

Horizontalpitch: when you first conceived the VM, it was called Preset Voltage, wasn’t it? I guess you did conceive the VM more as an actual voltage memory, when did you realize that it could be used as a keyboard controller as well? Would you even call it keyboard controller?

Meng Qi: Yes it was called Preset Voltage before. In fact from the beginning of development I choose to use touch control because I love it. The touch pads also feel great and very responsive with the current capacitive sensing technology. Yes I can call it a keyboard controller, with VM’s timing quantise feature it can be used as live controller which quantise your playing to the next clock, like Ableton Live! But there are even more power lies in the versatile auto modes. I appreciate all the important user inputs and feature suggestions to make them happen, from my friends like Bill, Aidan and Seth;

HP: what modules did you get inspired by to create this?

MQ: As you see in the market there is nothing like VM yet. In fact this whole project started from trying to make melodies with the Ciat-Lonbarde Plumbutter! You can even find some videos of me doing that on my instagram back in late 2013;

HP: What do you think about the combination of keyboards (in a traditional sense) and modular synths?

MQ: A musical instrument is normally with interfaces, which makes them expressive. Keyboard is one traditional domain that had been with musical instruments (like modular synth) for so, so long time, and you can also see so many innovations happening everywhere in the world. So keyboards are important for modular synthesizers, always was, and always will be.

Despite the limited number of dedicated solutions, you still get quite a range of options to control your modular with keys or pads and I’m quite sure that we’ll see some grow in this sector in the near future.

Of course there’s even more to controlling the modular than what I have covered here, so in an upcoming article we’ll also talk about other types of interfaces like touch-strips, XY-pads and Joysticks.