As recently promised (see Musikmesse2015 – the Modular and the World Outside) here’s our interview with Davide Mancini from soundmachines about their recent sensor-based control modules, future perspectives.

Horizontalpitch: I’ve seen that you have released another biometric-sensor module, the HB1heartbeat, which let’s you use the human heartbeat to control the modular. Where does the idea of using these sensors come from?

Davide Mancini: We’re really interested in the modular as an instrument that can be used in performances of various types. Scoring, sonic ambiences, body/dance, the connection to other art forms (both visual and performing) really interests us. After our experience with the BI1brainterface, regarding which we got an incredible response (both for the quantity, as for the quality of the feedback), the window of opportunity for a direct human-machine interface has become even wider. We have artists using the BI1brainterface to score paintings, using the observer’s input, others that use it during their poetry readings, to create evolving soundscapes, which change depending on which part of the brain is active. We have two PhD researches, which use the brainterface. One to transform sleep into music, the other to augment the sound of traditional instruments (e.g. cello) using the brainwaves of the player. The main idea is still to make these instruments, these interfaces, easy to use and economically accessible. soundmachines’ mother company has a lot of experience in the area of wearables, and this is a know how we are using a lot here, as in all other modules we’ve made. Before the end of the year, we’ll present another “system” (calling it a module will be a bit of an understatement this time). 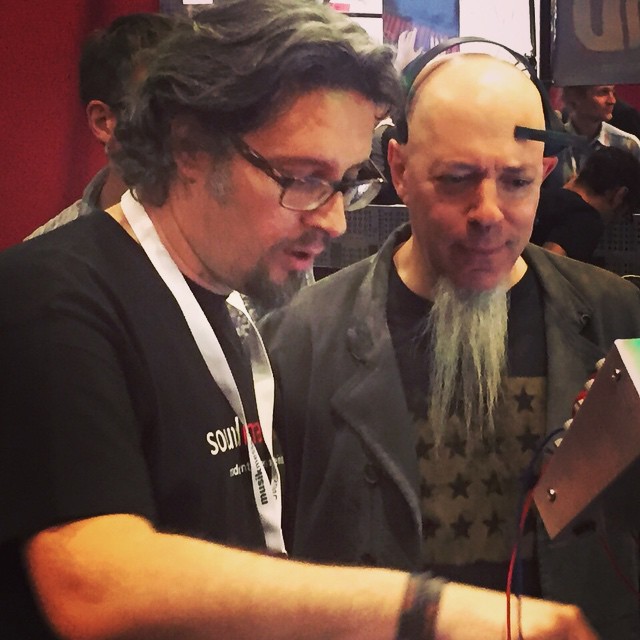 HP: In your recent interview with Tuesday Night Machines you say that soundmachines is a company more focused on controllers, is this the consequence of a conscious choice or a more spontaneous development?

DM: Our philosophy so far has been to design and produce original modules, nobody else had made yet, starting from our existing know how, which is very digital-oriented. So you get a lot of touch-based stuff, RF connectivity, integration between different technologies and so on. This was a natural choice, given the state of the market and our capabilities. As of today, if you take a look at our product range, it’s pretty clear that we have a focus on control-oriented modules.

I’m saying “as of today” because to make our product range more complete, something that makes sense from a commercial point of view, we are currently working on a series of affordable “building blocks” which will cover more traditional, but still necessary, areas: VCO, VCF, VCA, waveshapers, envelopes and so on. Of course, expect to find small surprises in these more orthodox modules as well!

HP: In general, what do you think of the current landcape of control modules?

DM: I think that this is an area that needs to be expanded. The gestural or at least manual control of synthesizers is an open one, by definition. As of today, apart from some dated solutions (many of which coming from Buchla), a couple of brave makers and some native MIDI solutions, the available products are few and far between. Apart from this, we should emphasise that in certain areas, like that of controllers, the departure from analogue technology, which is still avoided by 90% of the module makers, strongly limits the performance of control modules, both in terms of functionality and price. This is also an economic and R&D-related thing. Today software has a high cost during development and hence has a strong impact on the final price of the module. So a lot of people are not willing to risk this type of investment.

HP: Did you ever consider reinventing the keyboard for eurorack?

DM: We have two different modules of this type on the drawing table. Both use our touch technology from the LS1lightstrip and LP1lightplane modules. We’ll probably unveil one before summer! They’ll likely be proper game-changers 🙂

HP: Do you play the modular “privately”? How do you imagine the typical musician, using your modules?

DM: I started playing the modular several years ago. After a couple of months I started to feel like messing with it and inventing something new! I started to program Robotto just for fun and I posted a video on YT. Well… I got a bunch of mails, even from online shops, asking if I wanted to take it to production! After a couple of years the design of the first soundmachines module started.

In my opinion musicians who use modulars have a slightly more developed “creative”, “brave” and improvisational side than a regular ones. The system is a complex object, both hostile and alluring in its aesthetic. You also need a more developed knowledge than what you need to program a fixed-architecture synth, this is certainly both its big advantage and disadvantage. To tell you the truth these musicians are hard to label and believe me, I’ve met quite a few. There’s university professors working on electroacoustic researches, ex-ravers converted to producing minimal music and of course bedroom DJs/producers. They all have a story to tell and they do it their way, fortunately even when it comes to giving feedback to those who make the modules!